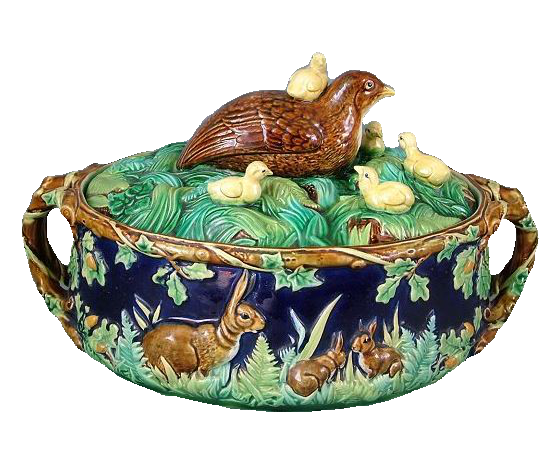 What IS majolica? Or is it maiolica? What’s the difference?

Start here. Which is the odd one out?

You spotted it. The dish with chicks looks different in style. This could help us with our majolica definition.

The glazes look a little different too.

Shiny runny colours versus strokes which appear painted on with a brush.

Could this indicate a difference in manufacture? This might also help us with our majolica definition.

Now we are looking at plates only.

Can you still see a difference in style? Sure you can.

There is also a difference in how they are made but we’ll come to that shortly. Let’s press on with style.

Here’s more of that Italian looking stuff. Nothing naturalistic here. This is ‘Italian maiolica’. Earthenware with opaque white glaze and painted decoration in the Renaissance style. For centuries the above style of pottery has been called ‘maiolica’.

Unfortunately at various times and in various countries it has also been called ‘majolica’ and still is. Awkward.

Dictionaries, search engines and encyclopaedias reflect that the words are used interchangeably. Many give the primary majolica definition as ‘maiolica’. Google does the same but add a qualifier such as ‘Victorian’ or ‘Austrian’ or ‘American’ and Google gets it right.

This google search shows us what we are looking for. Majolica made in the Victorian era 1851 to 1900. This is our ‘majolica’. Earthenware covered with richly colored glazes frequently relief decorated and naturalistic in style.

Majolica definition has morphed over the centuries. We clearly have two different types of pottery. To help clarify the situation let us try to compare them. The key differences we have shown in bold.

19th Century majolica was named by Minton as ‘Palissy ware’. The public called it ‘majolica’. Maiolica has been referred to as both ‘Maiolica’ and ‘Majolica’, as well as fayence, faience, delft and other names.

Next, the predominant styles.

Note the predominantly naturalistic style of 19th Century Victorian Majolica. Maiolica all through the ages is predominantly Renaissance in style.

Finally, differences in the glazes and how the pottery is made.

Note some key differences: Majolica’s richly colored lead glazes are applied direct to the biscuit. Maiolica’s tin glaze is applied to the biscuit unfired, then decorated with painted brush work before firing. The result is the distinctive opaque white layer with painted decoration. Note also the centuries old term ‘tin glaze’ describes the effect of adding tin, not the main ingredient in ‘the mix’.

Not everyone agrees. So we have been investigating and cross-referencing. A future blog will explore the many causes of confusion. It is a fascinating journey. We revisit extracts from key publications going back to 1851.

The OED (Oxford English Dictionary) Sense (definition) majolica, n. 3. “A type of 19th-cent. earthenware with coloured decoration on an opaque white tin (or sometimes lead) glaze”. This takes care of Minton’s rare tin-glaze product but ignores Minton’s popular earthenware with colored lead glazes applied direct to the biscuit that was perhaps the most successful pottery of the Victorian era.

We will propose a sense (definition) majolica, n. 4. , with citations (quotations) in support.