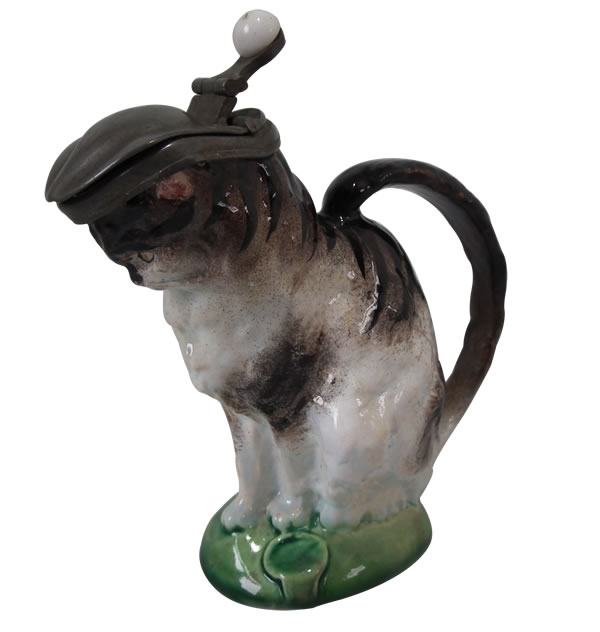 This is the first of a series of Majolica blogs. In this blog we remind ourselves of a few definitions and the enormous scope for decorators, collectors and antique enthusiasts.

In subsequent blogs we will explain the appeal, the many types, the makers, the countries, more on the history and some insights on value, care, collecting and conservation.

Our Madelena online store has in excess of 400 pieces of Antique Victorian English and European Majolica for sale.

Our Majolica for sale can be viewed here.

The rule is that anything over 100 years old is antique.

Not only the art and antiques trade but also Customs & Excise departments the world over use this definition.

When people use the term ‘vintage’, they are likely to be talking about an object less than 100 years old, possibly fewer than fifty.

When we say ‘majolica’ we mean the whimsical, richly colored, intelligent pottery that makes you smile.

Known today as Victorian majolica it was launched in 1851 by Mintons as ‘Palissy ware’.

New lead glazes and a special kiln were invented by Leon Arnoux working for Minton.

Queen Victoria reigned until her death in January 1901.

Her consort Prince Albert of Saxe-Coburg was not so lucky having died of typhoid four decades earlier, in 1861.

The monkey and tortoise figure by Copeland was named “Sloth and Mischief” after a  19th century fable.

Tin glaze earthenware pottery has been manufactured from before 1500 to the present day.

Confusingly ‘majolica’ and ‘maiolica’ have over centuries been used interchangeably.

We will return to the causes of confusion in another blog.

As long ago as 1875 the South Kensington Museum made a first attempt at persuading the public to use ‘maiolica’ only for tin-glaze and ‘majolica’ only for lead glaze. They published two booklets entitled Maiolica (tin glaze) and Majolica (coloured lead glazes) to make clear the distinction. Further enquiry reveals that only ‘MAIOLICA’ was published. The ‘MAJOLICA’ publication was a spelling error which the V&A museum (formerly the South Kensington Museum) will correct in due time. Only when we asked to read it did they realise the error.

was suitable for everything from floor tiles to the finest figurines.

It worked as well for a delicate dressing table set as it did for a monumental water fountain.

Its amazing versatility in home decoration, then as now, is due to its durability, color, creativity and range.

Lions, monkeys, and dogs are as popular now as they were in their day.

Cats however were not as popular in Victorian times.

Today, because so few were made, they are very rare.

Back in 1860 the British Empire was at its greatest and proudest.

Interest in the world at large continued also to broaden. Booming trade with the East brought everything ‘oriental’ suddenly back into fashion. A further flush of national pride following Petrie’s excavations in Egypt also found expression in majolica.

Underlying the design of every interior is a sense of taste and discernment. Also a subtle appreciation for the connection between our interior décor with history and art.

Further reading on majolica pottery can be found on this link: Discover Majolica

Majolica International Society  provides an online forum for majolica lovers. Conventions, symposiums, fellowship and fun are all part of the service.