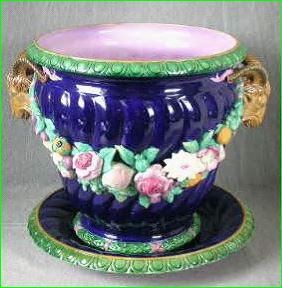 Our ongoing quest is for unambiguous evidence illustrating the four senses in which the word MAJOLICA is used including MAIOLICA. This blog takes a look at

from about 1848 onward. Questions arise. Was a ‘flower vase’ the same thing as a ‘flower pot’? Were authors’ descriptions of materials, processes and styles reliable? Was lead-poisoning the reason why processes are mentioned very little and materials – lots of lead in there – mentioned not at all?

The Four Senses, including maiolica n.

2. majolica n. Very rare English tin-glazed earthenware made from 1850 typically in Revivalist style in imitation of Italian Renaissance maiolica; having an opaque whitish glaze with brush painted decoration. Minton & Co. named it ‘majolica’ and exhibited at the 1851 Exhibition.

4. Victorian Majolica n.  Majolica manufactured in England between 1850 and 1900 of Sense 2. tin-glazed majolica, or Sense 3. coloured-lead-glazes majolica, often with an element of High Victorian whimsy.

The text describes Minton flower-vases in imitation of Renaissance Italian tin-glaze maiolica. The accompanying illustration is however of a flower pot (jardinière and stand) to the best of our knowledge decorated only by coloured lead glazes applied directly to the ‘biscuit’.

Using the text alone this citation makes clear the product is by Minton in imitation of Renaissance Italian tin-glaze maiolica – the “old Majolica”. The citation can therefore be used with no risk of ambiguity to support Sense 2. majolica n. English tin-glazed earthenware made from 1848 in imitation of Italian Renaissance maiolica having an opaque whitish glaze with brush painted decoration, named ‘majolica’ by Minton and launched at the 1851 Exhibition.

The citation above highlights a recurrent problem for researchers: authors often get it wrong.

The new, vibrant, coloured lead glazes of Arnoux at Minton are  hard-wearing, suitable for multi-purpose use in home and garden e.g. flower pots.

Tin-glazed products are, by contrast, generally prone to flaking, more suitable for interior décor and conservatories than for outdoor use.

As far as we know, the first published illustration of a Minton majolica flower vase/pot is the above woodcut in the Art Journal Illustrated Catalogue of 1851.

“Messrs Minton & Co…. exhibit some excellent Flower Vases, coloured after the style of the old Majolica. The quiet tone of colour he has adopted for their fanciful surfaces evinces the very best of taste.”

Hold on… the text does not seem to match the illustration!

Does the author truly know his subject? Or was this flower pot once produced in tin-glaze? Unlikely, but let us know if you know of one.

To the best of our knowledge, this pot was only ever decorated by coloured lead glazes applied directly to the ‘biscuit’ as illustrated here.

Good to see an original colour pattern on page 7 of November 2016 Majolica Matters!

Not exactly “quiet tone of colour”…

“Vase” sounds like interior décor. “Old Majolica” in 1851 definitely refers to Renaissance Italian tin-glaze maiolica. “Quiet tone of colour” seems more likely to describe opaque white with painted decoration than vibrant colored lead-glazes. It would seem to us the text describes Minton’s tin-glazed flower vases made in imitation of Italian Renaissance maiolica with brush painted decoration like the one (below) that we photographed recently in the magnificent Potteries Museum & Art Gallery, Stoke-on-Trent.

We return to the Art Journal Illustrated Catalogue. We search every reference to ‘Minton’ hoping to find a picture of a Minton tin-glazed flower-vase or a picture of anything else by Minton lead-glazed.

At last! We thrill to spot the iconic Minton Victoria Wine Cooler which won the only British medal for Arnoux and Minton – page 5, Majolica Matters, November 2016!

Dang it. The example in the Catalogue is reported as being the centrepiece of the dessert service ‘in Parian ware’ purchased by Queen Victoria (pp.114,115,116). Did the author of the catalogue get this wrong? [Ed. note: No worries. The Victoria Wine Cooler in the Exhibition gifted to the Emperor of Austria was indeed Parian ware. See this link V and A Museum. Did the colored lead glazes cooler come slightly later? Or was there a coloured version also in the Exhibition?]

“The third cut is from a WINE-COOLER, which forms the centre-piece of the dessert-service, and is, on the whole, the most meritorious object of the collection; our limited space does not permit us to describe it;”

The dessert service is that purchased by Queen Victoria, reported as being made of Parian.

We are interested in evidence of any Minton tin-glazed or lead-glazed ware exhibited in 1851. Is the above the Minton stand?

1851 London Jrnl. Arts 39 61 The specimens of the revived majolica in the Exhibition are by Minton; but the style of art in which they are executed does not deserve commendation.

The London Journal of Arts also reports on the 1851 Exhibition but in text alone, no pictures.

The London Journal of Arts citation of 1851 makes clear the product is by Minton in imitation of Renaissance Italian tin-glaze maiolica, the “revived Majolica”.

The citation can therefore be used with no risk of ambiguity to support Sense 2. majolica n. English tin-glazed earthenware made from 1850 in imitation of Italian Renaissance maiolica having an opaque whitish glaze with brush painted decoration, named ‘majolica’ by Minton, introduced 1851.

“The style… does not deserve commendation” is entirely subjective, though it might tally with “Quiet tone of colour” (above).

On p.62 only Minton’s tin-glazed flower vases and tiles are mentioned. Was there no ‘Palissy’ ware to report? Was the flower pot and under-tray that was at the exhibition, and illustrated, actually a tin-glaze example?

Also on p.62 is a further reference to the “comparatively tender character” of tin-glazed ware.

“But it is by their garden-pots, flower vases, and garden seats… that Minton have made their majolica so well known”

By 1867 when Arnoux writes this report he is content to use the word MAJOLICA for both the tin-glaze and the lead-glaze product. The word LEAD is entirely absent from this report. Lead poisoning of workers in the Potteries was a huge issue. We suspect Arnoux was being political. [Text in brackets is our own.] He says

The possibility of ambiguity is removed by the reference to “ornament only”. This eliminates the possibility of confusion with Sense 3. – the hard-wearing majolica of coloured lead glazes applied direct to the biscuit.

“…however highly majolica may be esteemed, it will always remain an article of luxury and ornament only… Any other employment of it, as for drinking cups, for example, or Dinner services can never be anything but a passing fashion… In ornaments for the drawing-room… or for flower vases… it will find its appropriate use,…” p.148

“… any kind of earthenware with painted decoration on tin glaze.”

“MAJOLICA – the name absurdly given by Victorian potters to earthenware decorated with coloured glazes introduced at Mintons about 1850, for… flower-pots…”

We promise to conclude our investigations eventually. Meanwhile the discovery of unambiguous citations supporting the four senses of the word majolica n. goes on.