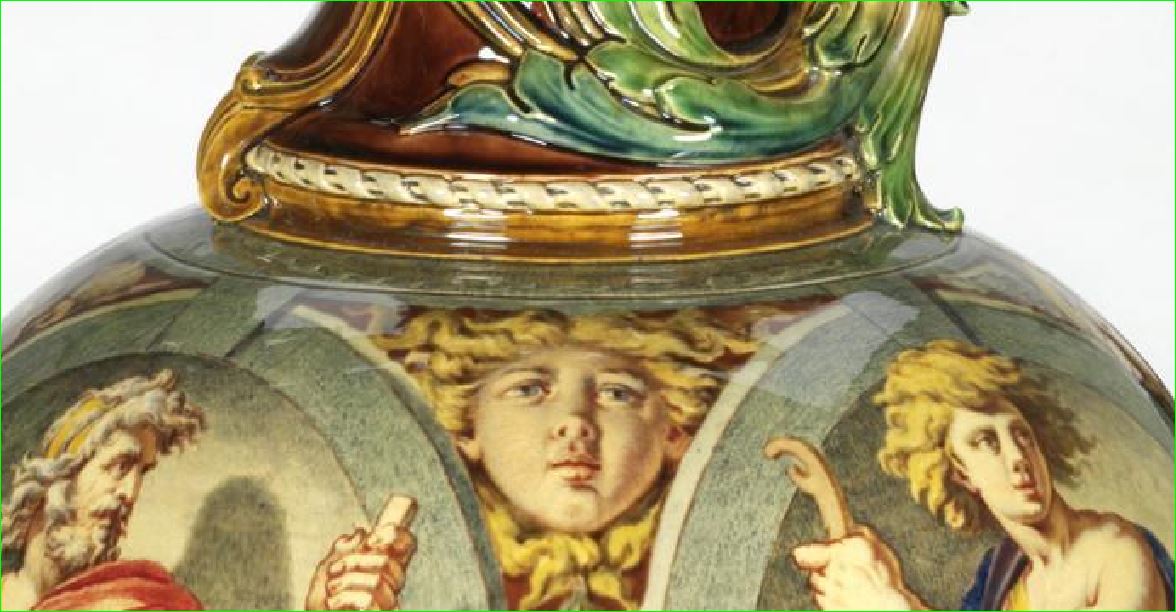 You will love this…

Second, a brief history of how lead glazes developed

Third, a comparison of the two most important glazes, lead and tin

All lead glazes are

Is there an easy way of recognising glazing by colored lead glazes? Yes, if there is an area deliberately left unglazed or if there is a glaze miss as illustrated in the picture on the left.

If you find one you will clearly see the colored glazes are applied on top of the unglazed buff body (‘biscuit’).

Two thousand or so years after they were first discovered, lead glazes reached perfection at the Mintons factory in England 1850 to 1880. The technical genius responsible was Leon Arnoux. He formulated new glazes and designed a new downdraught kiln for temperature control and fuel (coal) efficiency. He would be known later as ‘the man who made Mintons’. His colored majolica lead glazes were imitated or copied world wide. Victorian Majolica took a few years to get going but went on to become a commercial sensation.

So where did it all begin? Definitely not in Majorca!

Lead-glaze on clay pots to solve the problem of porosity has been found throughout the Roman Empire which extended from North Africa to the north of England.

The Chinese made lead-glazed figures as well as pots. Wow. This masterpiece pre-dates Bernard Palissy by 800 years.

The ‘biscuit’ is painted with ‘solid’ colored lead glazes and fired. Note the green glaze color run. Note the way the potter has used the natural buff biscuit color covered with plain lead glaze as part of the decoration.

Glaze technology is as much art as science. Advances come with trial and error.  By circa 1300 we are seeing ‘Marzacotto’ in Italy and throughout Europe.

The big difference here was the use of ‘slip’ and a new color or two.

C Fortnum Drury, writing in 1875, quotes Passieri, the earliest known author on the technology of ceramics

“…it was about the year 1300 that the method of covering the clay with a ” slip ” or ” engobe ” of white earth, or the coarser earth of Verona, was first adopted. Slightly baked, it was glazed with ” marzacotto ” (oxide of lead and glass), applied wet and again fired ; and this glaze was variously coloured yellow, green, black, and blue, by iron, copper, manganese, and cobalt. “

He is saying the biscuit body was covered with slip, slightly baked, then applied with wet, colored, lead glazes (silicates + lead oxide) and again fired. Colors were the oxides of iron for yellow, of copper for green, of manganese for black and of cobalt for blue.

Circa 1550 we meet Bernard Palissy, the father of French ceramics.

Here he is. Holding one of his vases. Many of the pieces formerly believed to be his own work are now attributed to followers.

We love him best for his ‘Rustic wares’ (Rustic Figulines). Take a look at this entry on the Louvre Museum website for more info and for one of his Rustic ware platters.

The ‘Rustic’ ware is ultra-naturalistic, entirely unique at this time. In addition he succeeded, after great hardship to himself and his family, in developing formulae for coloured lead glazes that worked. Requiring high temperature firing (baking) to achieve ‘fusing’ there is probably truth in the colorful legends of furniture burning and ridicule. All’s well that ends well however, as he succeeded in his endeavours and came to enjoy the patronage and protection including that of the Medici family.

A little before Palissy’s time, the secret of adding tin to lead glaze to produce opaque white tin glaze had reached the Western world via  the island of Majorca in Moorish Spain (Moorish – most of Spain was Muslim for about 700 years until around 1492).

Circa 1760 onwards – Development of Lead Glazes in England

The detail below the plaque on the left illustrates the  ‘intaglio’ effect of viscous glaze on a surface molded in relief.

Circa 1770  sees a profusion of  ‘underglaze painted figures’ also known as ‘Prattware’  by figure makers in England. The lead glaze goes on top. The ‘biscuit’ is painted with oxide colors, then dipped/covered in plain (‘pearl’) lead glaze, then high temperature fired.

By circa 1830 ‘green ware’ dessert services were being marketed by Wedgwood, Brameld (ceased trading in 1843) and others. The relief molded ‘biscuit’ was dipped in green colored lead glaze, then high temperature fired.  ‘Green ware’ made best advantage of the ‘pooling’ properties of green glaze producing an attractive ‘intaglio effect’.

Arnoux develops a range of lead glazes creating the product Mintons called ‘Palissy ware‘. The public knew it only as ‘majolica‘. Today it is generally known as ‘Victorian Majolica‘. First made by Minton, thereafter copied throughout Europe and USA.

Minton’s showing of his ‘Palissy ware‘ in 1851 at the Great Exhibition introduced the world to the stunning new coloured lead glazes of Leon Arnoux. These were applied direct to the biscuit body. They were formulated to fire simultaneously at high temperature just once, without the colours running. What an achievement!

Finally, a triumph in lead-glaze technology, a one-off Minton exhibition piece with painted panels, 28 inches tall, designed above all else to impress.

The painter is Emile Jeannest. The vibrant colored lead glazes above and below are what we expect. 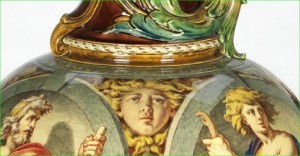 The centre section however, while it might look like an opaque white tin-glaze panel with brush work on top in oxide enamels, is not.

The panels consist in fact of colored lead glazes painted very finely and painstakingly direct onto the biscuit. A final lead glaze covering was added before final firing.

Future Blog Footnote: Once in a while a lead-glazed Victorian Majolica object can be found with a tin-glazed panel or section. Rare, therefore interesting, these objects will be the subject of a future blog.

Most writers and all dictionaries have been woefully vague regarding the distinctive composition and qualities of lead-glazed pottery vs. tin-glazed pottery. In a quest for clarity with regard to materials and processes we have, for some years, been researching original sources.

So what is the difference, and why does it matter?

The growing merchant classes of Victorian England, the ‘new money’, were attracted not only by the exciting new styles developing at the same time as coloured-lead-glaze majolica, but also by the relatively low cost and durability/usability.

Circa 1460 knowledge of the tin-glaze method reached Italy. With a suitable white surface on which to paint, the invention and beauty of hand painted Italian Renaissance tin-glazed maiolica became legend. Minton so admired these creations that he determined, with the help of Arnoux, to reproduce as far as possible both the method and style.

Cost of Production – Lead-glazed has one less process

Tin-glazed earthenware is biscuit body, typically flat surface, dipped or coated with tin glaze and allowed to dry, unfired. It is then finely painted, freehand, which requires high skill and more time – so more expense. The brushwork is applied to the dry unfired tin-glaze. Then it is fired.  Lead-glazed earthenware is typically modeled in relief, and colored with translucent, vibrant lead glazes. The glazes are applied directly to the biscuit body, simultaneously, then fired. One less process, the ‘dipping’, means less cost.

Detail pics of this Neptune platter

Note the intense vibrant ‘block-painted’ colors of Minton’s lead glazes. The figures are of plain lead glaze, no colour.

Depth and strength of color contributed greatly to the success of majolica.

Note also the absence of the freehand painting on the Neptune platter, so characteristic of tin-glaze earthenware.

Tin glaze was less durable than lead glaze so less suitable for heavy domestic or outdoor use. 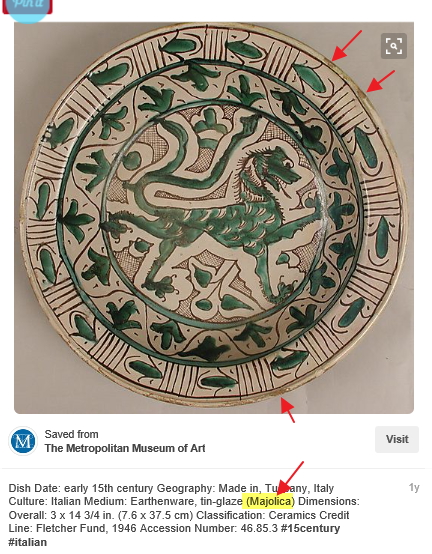 [So few examples are known, we cannot be sure this generalisation applies to Minton’s English tin-glazed ware. Ed.]

A gorgeous example of 15th century Italian tin glaze maiolica is in the Metropolitan Museum.

‘Majolica’ for earthenware decorated with coloured lead glazes direct onto the biscuit.

French faience and Dutch and English delftware were developments of Italian tin-glazed maiolica.

Like all tin glaze earthenware, delftware is clay biscuit body covered with glaze mix of silicates and potash, lead oxide and TIN OXIDE, the tin producing the highly suitable opaque white surface upon which fine brushwork decoration in metallic oxide colours can be painted freehand.

Leon Arnoux, 1877 on Pottery and Palissy

Paul Atterbury entries on MAIOLICA and MAJOLICA are comprehensive