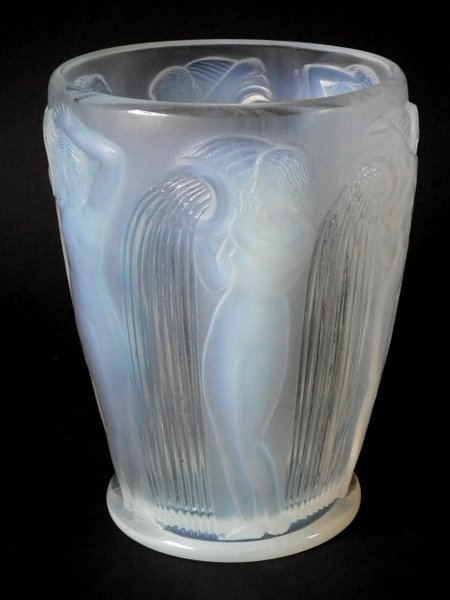 René Lalique created more than three hundred vases in an unimaginably inventive variety of styles. Check some out on our website…

Vases from the Maestro

The vases illustrated below will be on our Stand 30 in Hall 2 at the Glass Fair on Sunday – two days from now.

His outstanding gift to the world is sensational design in glass, made available to the many not just the few.

How wonderful is the subtlety of the above René Lalique cased opalescent glass ‘Poissons’ Vase. The fish, almost indistinguishable to begin with, demands closer attention holding one’s interest long after the first glance.

‘Danaides’ is a great example of fabulous design. ‘Danaides’ also illustrates a trademark device he used, most likely at the very conception of the design. It seems he would choose an interesting subject with a fascinating subtext. The piece would be named after the subject. The ‘Danaides’ inspiration originates with a painting in 1903 by John William Waterhouse.
One can imagine the lively mind of René Lalique enquiring into the myth with customary energy, consequently developing the design.

Eternal punishment for the fifty daughters

The painting depicts some of the fifty daughters of Danaus. These young ladies were forced to marry the fifty sons of his twin brother, a king of the realm with power over all. Or so the king believed.
The girls, however, were having none of it. The myth has it that all but one of the fifty daughters killed their husbands on the wedding night. Wow. Girl power, right? For this they were condemned to an eternity of pouring water into a leaky vessel. This may seem not much of a punishment to us. But to the ancient Greeks this was worse than death itself.

Introduced just one year later, the name chosen for this design is more down to earth. ‘Beautreillis’ translates to ‘Beautiful Lattice’. One wonders whether René first saw the pattern in nature thereafter making the design.

Decorated around the outside with hemispherical bubbles. When you look into the bubbles, they beautifully relect/refract bubbles from all around the vase.

Another masterpiece from René. Does anyone out there have info on the orgin of the name ‘Bammako’? What on earth do these gorgeous bubbles represent? Some animal, plant or jellyfish? Or merely a pattern? To my eye they pulsate with living energy. I would love to know what it was that sparked Rene’s imagination. What is ‘Bammako’?

3 Replies to “Lalique Glass Vases – How wonderful are they?”