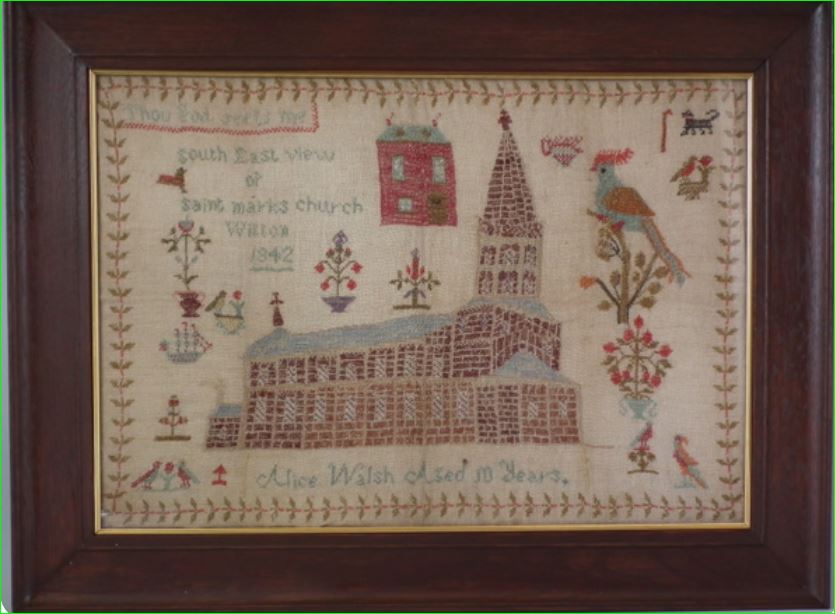 Some of us are fascinated by those English needlework samplers that depict buildings, so much so that some collections consist of nothing else.

One collection known to us consists only of Solomon’s Temple samplers.
Solomon’s Temple was a teacher’s favourite as it would likely have been used as a focal point around which a variety of religious topics could be taught. While the veracity of the depictions would not have been questioned by mere children the importance of the original site on Temple Mount (Mount Zion) in Jerusalem is undisputed.

Extensive research by numerous historians has resulted in varied reconstructions of the temple design in later centuries. That of the Spanish Vista de El Escorial, was possibly the most magnificent and definitely used as the pattern used in some of the sampler designs including the Solomon’s Temple sampler on the Madelena website at time of this post (click the link to see what we mean):

House samplers depicted the homes of the girls under instruction and are hugely popular with collectors. These were their own homes, fields, sheep, dogs and so on. The connection with the past is palpable. We maintain a collection of great examples to purchase online. At the time of this post we have the following house samplers available for sale in our online store:

Churches are of particular interest because they are most likely to be still standing. Most of the country mansions similar to those depicted in the house samplers listed above were demolished after 1945 due partly to the introduction of heavy taxation on inherited property (‘death duties’) and partly to the demise of primogeniture (the right of the firstborn child to inherit the family estate) in a world upside down following the great war to end all wars. The online Madelena store has two great examples still available at the time this blog is published:

On the left is an image of Witton Church in its former glory as depicted in this wonderful sampler.

A great little snippet from this wonderful sampler is this tiny stitching error. See how ten years old Alice has stitched ‘Thou God seets me’? I am pretty sure she intended ‘Thou God seeth me’. What do you think? Maybe she misheard her governess or misread her writing…

I feel a connection with this darling girl of so many generations past. I feel her grandmother’s delight as she willingly overlooks the mistake.

Present day pictures show this Church of England original much added to and frankly now become a  much less attractive shape.

Alice stitched her sampler four years after the church was consecrated in 1838.

Various restoration work was done at the same time.

The original structure was designed to seat a congregation of over 700 souls.

Antique needlework samplers were made by children and every one of them unique. How wonderful is that?

To see in reality an actual building depicted in a sampler by a child elicits a powerful sense of connection between past and present, reminding us of all those changes that have taken place in the material world since our girl skipped to church glowing with youth: life expectancy has doubled; photography, electricity, bicycle, motor car and air travel have all been invented; women’s roles and rights in society have been transformed; and lately the information revolution and a digital age has dawned making it now possible to share with everyone the magic of discovery.

Nearly two hundred years ago, Mrs Pask ran the local school in the country town of Halstead, in the county of Suffolk, close to Dedham Vale an area known as ‘Constable country’ after the renowned but financially unsuccessful landscape artist John Constable who lived there and wrote to a friend in 1821 “I should paint my own places best.”

A year later… one can sense the excitement on that warm summer day… Mrs Pask gathers her pupils together to announce that the school will today be visiting the local church, and the older girls will be sketching its outline to make patterns for samplers they will be stitching to show their parents what wonderful progress they are making with their needlework and education. Many months later a sampler is proudly completed, dated 1822 and inscribed ‘This sampler was worked at Mrs Pask’s School, Halsted, Essex’. The name of the stitcher is unfortunately indistinct.

Now to a photograph of the very same church taken eighty years later from a different angle, but allowing for children’s inaccuracies undoubtedly the same building.

And here it is again today, exactly one hundred and eleven years later. 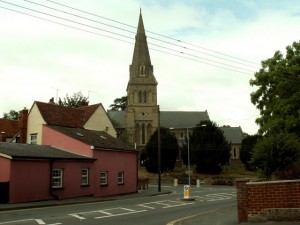 Does it not make you tingle all over to know that one may even today enter this church, tread the flagstones trod by those girls and perhaps seek out the pew wherein our young stitcher might have pondered the meaning of salvation between pre-teen distractions. We can even pore over the indistinct lettering of lichen encrusted headstones in the churchyard outside, hoping to find the last resting place of Mrs Pask and wondering if her pupil, our stitcher, is herself somewhere buried here.

One Reply to “Antique Samplers, Houses and Churches”